The town of Shichigahama is surrounded by water on three sides, making up the south of Matsushima Bay and facing the open Pacific Ocean. The town's highest point is around 50 meters above sea level and the area is covered with pine and cedar trees. The seacoast and nearby islands make Shichigahama simply picturesque. With its mild climate, seacost, and natural marine and forest resources, the area was inhabited from the Stone Age. Seven coastal villages developed and in 1899 merged to form the current town of Shichigahama (Seven Beaches). There has been occasional talk of Shichigahama merging with nearby cities, but this has not yet occurred, and the town continues to develop with its own unique charm. 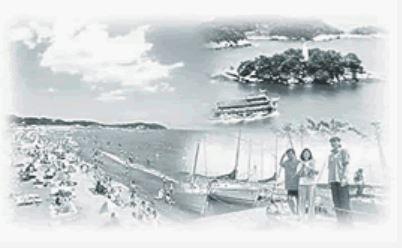 The town lies on a round peninsula bordered by Shiogama and Tagajo in the west, Matsushima Bay on the north and the Pacific Ocean on the east and south. The climate is relatively mild.

Shichigahama is dependent almost entirely on the ocean. The fishing industry and other marine products are the main income sources; however, this is decreasing as more residents commute to urban areas to work.

Shichigahama is geographically the smallest town in Miyagi, though it has a population density similar to central Sendai. The natural, green environment, coupled with exsquisite ocean views, make it a very desirable place to live

Shichigahama fresh fish and other marine resources are sold directly to consumers. Every year rice and vegetable production increases on a variety of efficient farming areas in town. The members of Shichigahama's Fishermen's Association work together to promote the trade and educate those involved. This helps stabilize the industry and the market into the future. Producers of nori (seaweed) are also working together and managing the industry to assure stability in the future. The Chamber of Commerce in Shichigahama started when Japan Agriculture and the Fishermen's Association worked with the town administration to propel Internet sales and penetrate the general market with Shichigahama's marine and agricultural goods. The Chamber also researches trends to see that goods are developed and made available according to the needs of consumers. Finally, the group works to preserve the natural environment and promote sightseeing and tourism opportunities while making sure that the charm of Shichigahama is never lost.

The Shichigahama mindset is nurtured by an easy, leisurely living environment. While keeping nature an important part of the town's identity, the ideal is to achieve a friendly, barrier-free way of life. With increasing consciousness of environmental goals, residents are working to make a positive change in the use of resources and in decreasing garbage production. Clean, comfortable living means protecting the environment, so this has become a priority for the town and its residents. Shichigahama is also prepared for natural phenomena that may pose a threat, such as earthquakes and tsunami. The town maintains a communication and evacuation system in the event that such a natural disaster occurs, and has encouraged awareness in order to prevent damage in advance. The town also hopes to bring the administration and residents closer together, making information on the town's environment, health and healthcare, welfare, education, arts, and culture available to everyone.

Recreational, biking, and walking areas in Shichigahama are clearly marked on main roads. With much of its natural terrain still in tact, nestled between Matsushima Bay and the Pacific Ocean, Shichigahama is a stunningly beautiful town. Visitors should be sure to go to Kimigaoka Park, the Tamonzan viewpoint looking over Shiogama Bay, and a few of the many temples and shrines sprinkled over the area. The residents know how special the scenery is here, and work to keep Shichigahama beautiful throughout the four seasons. The people value the seaside location as well as what it provides. Shichigahama's natural environment, its history, its educational opportunities, and its many activities make it a very desirable place to be.

The many residents of Shichigahama have many interests. People of all ages can pursue their hobbies, meet new people, and perhaps even start something new at the Shichigahama Lifelong Learning Center. The home for the arts in town is the Shichigahama International Village (Kokusaimura), a facility offering space and resources for many groups within the town to meet and participate in various activities. The Kokusaimura also holds events and exhibitions, the schedules for which are available on the internet. Grassroots international exchange takes place through Shichigahama's sister city relationship with Plymouth Massachusetts in the United States. Every two years, Shichigahama welcomes a student delegation from Plymouth, and in alternating years, a delegation travels to Plymouth from Shichigahama. Students have also spent year-long academic exchanges in their sister city, and the two exchange committees are working to start business and other activities. The Kokusaimura and the Lifelong Learning Center also create other international and domestic exchange opportunities through sports and cultural activities which appeal to all ages and backgrounds. Protected cultural sites within the town are used as educational tools. In experiencing the past at the Shichigahama History Museum, young people of the town can continue the story that they were told by the generation before them, passing it on to the generation yet to come.

The plan for the future of Shichigahama is focused on three major concerns: Environment, Education and Welfare. The Town looks to welcome the next generation, and hopes their creativity will usher in a positive future.